January 24, 2006
Yay! Electra is at her halfway point (minus those ends, how scary are they?) Nothing insightful to report since my last post, just more of the same. I'm picking up speed, though. I feel like I knit about half this in one night. I stopped paying attention and when I stood up to go to bed, I looked down and saw I had doubled my progress. Woo hoo! I swear I do enjoy the process, but everyone loves a FO, right? Here, have a look at her: 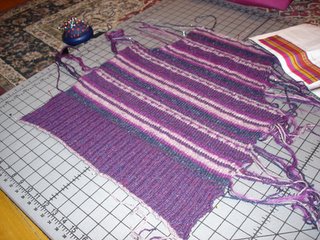 Want a closer look at those ends to weave in? 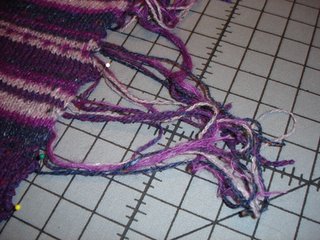 Didn't think so. I'm going to sew them all in before giving it a bath and blocking.
In other news, my yarn for Highgate arrived today from across the ocean. Ebay and Cucumberpatch Rock! Great deals and free shipping, what beats that? You can't tell very well from the picture, but the color is a dark purple. As I've complained about before, I'm never around during daylight so you'll have to trust me about the color. 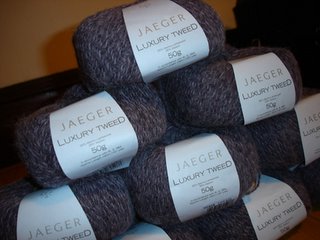 In other knitting news, I've been chipping away at Dad's Sharfik. It's my portable knitting project, so I get in a few rows on the train and during lunch.

Speaking of the train, I had a rather startling experience today on my way home. As a little background, the T packs up fast and dense during rush hour. People pack into the train rather than wait a few minutes for the next to arrive. With all the winter coats and body heat, it's not the most serene thirty minutes of my day. Because knitting makes my ride feel so much shorter, I'm usually pretty psyched to actually get a seat. Unfortunately certain types have no etiquette when it comes to deciding whether to squeeze into the tiny seats or just suck it up and stand. I was lucky enough to secure a seat today and was blissfully knitting some cables when I noticed the seats on either side of me freed up. Curious to see my new neighbors, I looked up and saw a man three times the size of the seat (I'm not trying to offend anyone, but come on, I feel bad squeezing into a seat when I have a big coat on and I can fit both cheeks without overlap). He swung around and literally sat on my lap. Yes, he was in his seat, but also in half of mine. I took a deep breath to manage my anger when things took a turn for the worst. Not only was this guy in total invastion of my personal space (not to mention crushing my leg), but he stank worse than I could imagine possible. I could think of some adjectives, but I can't bear to remind myself of the stench. It was so bad, I couldn't breathe. I had to turn to my other side to get any air. I got lightheaded, kept messing up my knitting, it was miserable. The worst thing was that I stayed, and do you want to know why? I felt bad. I felt bad this guy would know I got up because I didn't want to sit next to him. The train was packed, I wouldn't be able to make it even to the other side of the car. How sad am I? When I finally decided I was going to pass out from lack of air, his stop came up and I was able to get some fresh air in my lungs (well, as fresh as underground Boston air gets).

Not really knitting talk and probably not all that interesting to most, but I had to vent in an attempt to rid my memory of my stinky subway ride. (shudder)

lobstah said…
I'm enamored of Electra--I can't believe how fast you are knitting it up. It looks perfect.

Your blog layout is all impressive and customized, too! Now I feel like a blog slacker, ha ha.