February 12, 2006
Finally I have some shots of a finished Electra. Here she is: 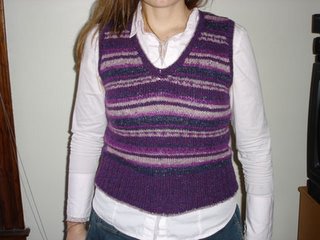 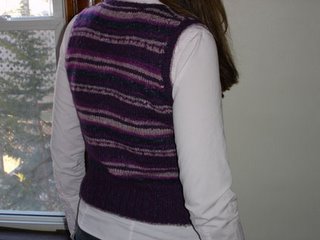 Notes: Overall, I'm pretty happy with the end results, although I think I will block it differently after I wash it next. I was really worried it would be too tight, so I focused on attaining a proper width. I think it's a little too big and looks bulky, plus I wouldn't mind it being slightly longer. I knit a few inches more than the pattern suggested before armhole shaping to keep it a little longer, but I could go for another inch or so. Also, the stripes are a little wonky around the bust from picking up stiches for the collar with smaller needles. I'll try to play around with that, too.

This sweater knits up quickly with a large gauge for the yarn. The resultant fabric is thin and airy and very soft. This was my first fair isle and it was fun to see all the patterns come to life. Purling in fair isle wasn't my favorite part, though.

So, what's the first thing one does after finishing a project? Buy more yarn! This is what I bought... 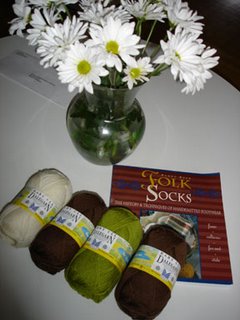 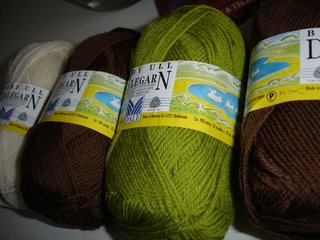 Definitely some Norwegian Stockings in my future. I have all these sweaters floating around my brain, but I think I'm going to knit a few smaller projects and then see what the weather's like. Also, when I eventually get my Rowan magazine (no, I still haven't received it!) I'm sure I'll want to knit some stuff from that.

I have yet to start my Backyard Leaves for the Knitting Olympics, but plan on casting on tomorrow night. I'm sooo close to finishing Sharfik, I want that off the needles before I start anything else. Pictures of that soon.

lobstah said…
Electra looks spectacular! And I think you are being too nit-picky...it looks adorable on you!

caitlyn said…
The vest is gorgeous!! Congratulations on a beautiful FO. Can't wait to see your Norwegian stockings!
11:19 PM