March 14, 2006
I left Zoe's kitty pi on the couch as a suggestion for her to use it. In all reality, I knew it would take some serious coercing (luring her with the promise of treats) to get her in the thing. But, I thought I would let her try on her own terms. After a little blogging, I walked in the living room and saw this: 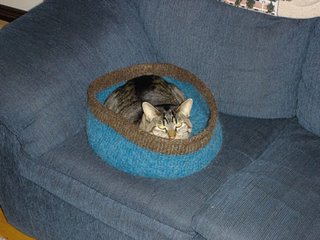 How cute is that? Didn't take any forcing or anything. She looked a little unsure of the new kitty pi, I think she thought it was just a convenient warm spot, not a bed just for her. An episode of Sopranos later, this was the scene... 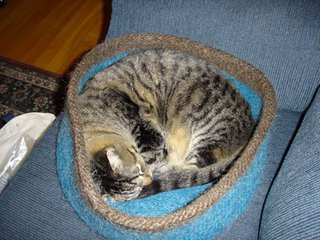 Yup, she's claimed it at this point. She used to curl up on my lap whenever I knit, but I've since been ditched for the kitty pi.

Notes: This was a super fun, quick project. I knit it up in just a few days. Getting to the laundromat took longer than the actual knitting. This was my first felted piece and I think it came out pretty well. I don't have access to a home washing machine, and instead ran the "pi" through two hot cycles at the laundromat. There's still a little stitch definition, but it's definitely more felted than knit. The cat likes it, that's what counts, right?

In other non-cat news, the Norwegian Stockings are done. I don't have any pictures, though... I'll post some tomorrow or Friday. I'm hoping to get a little sunlight to do them justice.

lobstah said…
Everyone together now: "Awww..."
Glad your felting worked out well. Durned felting!
9:12 AM