A Finished Backyard Leaves and Some Updates

April 09, 2006
BACKYARD LEAVES
Despite my lack of posts, I swear I have been knitting. I finished Backyard Leaves just in time for some balmy weather. Like any knitter with a new FO, I wore it anyway (it matches perfectly with my Norwegian Stockings!). Unfortunately (or fortunately for the scarf), temperatures dropped as quick as they warmed. Here's a few shots of it basking in blocking glory.... 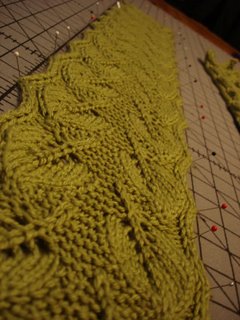 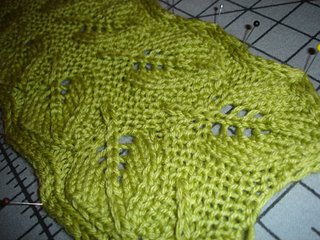 And here's a shot of it's current state after exposure to about 10 drops of rain. So much for blocking. I'm going to try a second time and steam block rather than just spritz and dry. I still like it, I just wish you could see the leaves more. 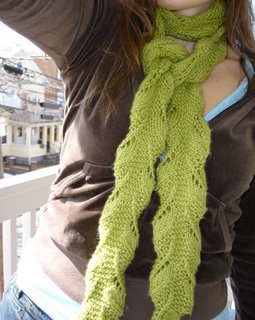 The specs:
Pattern: Backyard Leaves from Scarf Style
Yarn: 4 Balls Debbie Bliss Cashmerino Aran in Pea Green
Needles: Size 7 Addi Circs
Knitting Duration: January to March 31st.
Mods: Subbed yarn.
Comments: This pattern was a blast to knit; consistently entertaining. The yarn was a great match for the pattern and so soft! It feels brilliant against my neck. I can understand the complaints I read about Cashmerino Aran, I can already see some pilling and have to be so careful when I wear it with my jacket with velcro. As I mentioned earlier, I'm having some issues with the blocking and think another blocking is necessary for BY to reach its full potential. All that said, I would definitely knit this scarf again.

(the looming shadow is Zoe) 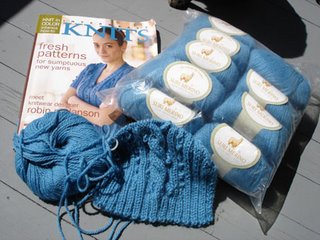 As soon as Backyard Leaves was off the needles, I cast on for Bobble Blue. I've been eyeing this sweater since IK released the preview. I ordered the yarn from Discount Yarn Sale where I found it ridiculously cheap. Something like $42 a bag. The downside is waiting 2-3 weeks, but I think was worth it. When I first dove into the bag, I wasn't 100% psyched about the yarn, it wasn't as soft as I expected and the color was a bit different than I thought. Once knitted, the yarn has a completed different personality. The fabric is *so* soft and seems more durable than the last alpaca sweater I made. Obviously the color didn't change, but I've come to terms with it and like it now. I've barely made any progress, but I'm already loving the pattern and think I'll get a lot of use out of this during the spring and cool summer nights. My original grand plan was for this to be ready to wear on Easter. Definitely not going to happen. 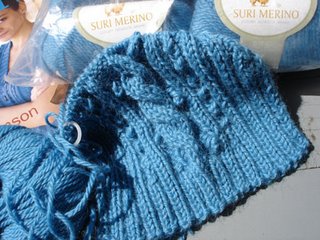 I also knit the panel for my cable purse. I'm going to try and finish this up today. 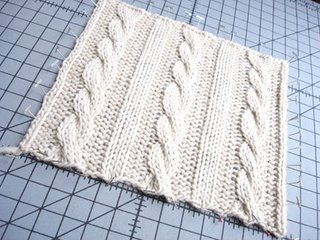 A daily user of the T system, knitting keeps me sane during my commute. My current portable project is a pair of Jaywalkers in Sundara Yarn. Take a look... (ignore my winter feet) 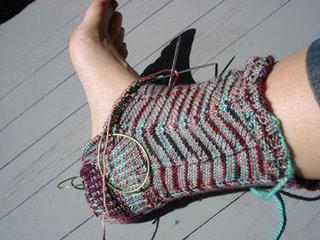 an upclose shot of the yarn and striping: 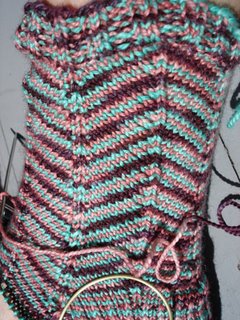 and another just so you can see Zoe. 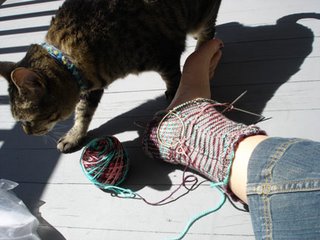 The yarn is delicious and I'm finally getting the pattern. I started these before with different yarn and kept messing up (how embarrassing considering everyone's knit these and I've yet to hear of anyone who had trouble). I think it all finally clicked this time.

Sorry for the super long, picture-heavy post. I'm just lazy and wait for the projects to build up before I whip out the camera.

designer said…
Dear friend,
I saw your weblog and it was
interesting for me. I hope successful for you.
I would like to introduce an address that you will find very interesting and beautiful templates for your weblog that offer you.
Best Weblog Templates Pack
4:13 PM

Elizabeth said…
Congrats on Backyard Leaves - it's such a beautiful pattern, I never get tired of seeing it knit up. I used a bit of steam on mine to block it, just FYI. And the rest of your projects are looking great too!
4:52 PM

Your backyard leaves looks delectable in that color. There's something organic about lace leaf patterns in green yarn.
7:01 PM

Anonymous said…
Wow, you've certainly been busy! Backyard Leaves looks awesome on you, and I really like the colors of your Jaywalkers, too!
8:38 PM

aija said…
Everything looks great-- I espcially dig the color for your backyard leaves. Its perfect for spring :)
4:58 PM

j a r e d said…
hey kelly. thanks for the blocking advice! (i was going to e-mail you but couldn't find your e-mail address on your site.)

backyard leaves is looking great! i still have plans to make one for my girlfriend in the future... i'm a little behind the game on this one, but it looks like a lot of fun.