November 19, 2006
Yesterday, I tricked my sister-in-law into modeling birch for me. See, I was the official photographer for her holiday card photoshoot featuring her two pugs, Lola and Luda. After casually slipping in the request after spending a half hour snapping photos and following two ADD dogs around while my brother-in-law lured them with treats, she was happy to oblige. Did I mention they're practically still puppies, only turning one last week? Pug puppies have zero attention span. Anyway, let's get down to business. 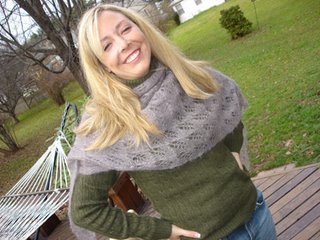 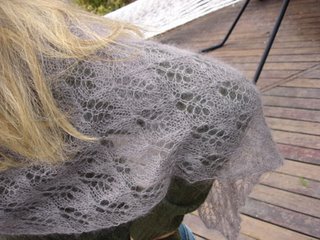 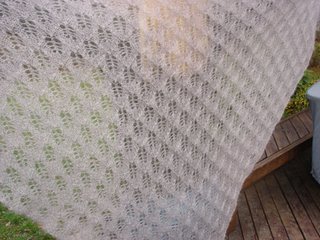 (GIANT Shawl!!)
Commentary.
This was a thoroughly enjoyable first KSH lace project. It took some time adjusting to the slippy yarn, but the Bryspuns eased that along. The plastic needles and sharp points grip the yarn and prevent hairpulling and yarn throwing with those K2tbl's. KSH is the warmest, yummiest yarn EVER. I see why there are so many addicts out there. Not only is the yarn deliciously soft and practical, but I feel like I really achieved something in taming it. Seeing all those little leaves lined up perfectly after seeing the yarn in its original ball form just puts a smile on my face. And it kept me warm while I kniting. 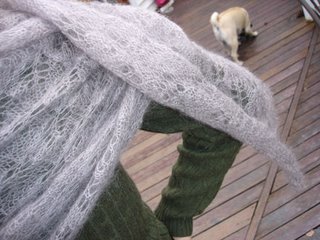 The pattern. Any normal knitter can memorize the pattern, although I compulsively referred to it for the first 200 rows. I *did not* want to frog KSH. (although I did have to a couple of times). I prefer working slow than fixing mistakes.

The most daunting part for me (other than the 299 stitch cast on that I did TWICE) would have to be weaving in ends. I tried splicing them to no avail, so I weaved them in for a good 4 inches or so. I hope that's enough. I hear that KSH gets hairy over time, so I hope the little ends will stay "stuck." ***crossing fingers*** I think I would cry if it unraveled when my mom was wearing it. I can't even begin to imagine how to fix that, either. There should be seamstresses for knitted items.

What else? I relied on Mason Dixon's "Top Ten Things to Remember while Knitting Birch" as my Birch primer, which Veronique's blog steered me to. I used the stitch markers the whole time, although they slowed me down. Again, didn't want to make mistakes and frog KSH. 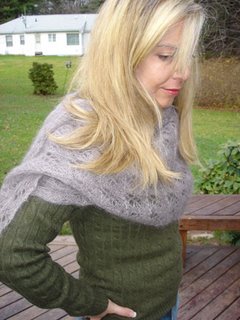 I think if I were to knit another Birch, which is certainly possible, I would use smaller needles. The final product is HUGE, which doesn't bother me, but it could produce the same effect with a smaller size.

I've read this all over the blogs, but I'll say it again. Buy 4 balls of yarn! I wasn't clued in on this until after I purchased the yarn and spent the duration convincing myself I would have enough yarn. "Oh, the rows just get shorter! These balls of KSH last forever!" I would tell myself. Yup, I was wrong. So, I repeat, buy extra yarn! 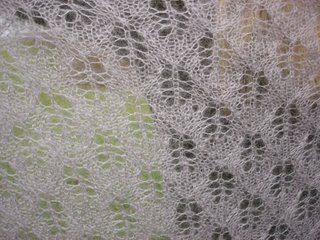 Mods. I followed the pattern to the T with the exception of starting with two rows of stockinette suggested by MDK (hmmm, maybe that's why I ran out of yarn...) More than just helping you set up those first pattern rows, I think the little border stablilizes that first pattern repeat in teh final product. Otherwise, the leaves would look like they could slide off the shawl.

Overall. Love it! I just hope my mom does, too.

Next steps. *Finally,* gift this to my mom. Happy Birthday, Mom....4 months late. Hopefully, I'll get some shots of her wearing it to post.

And here's a pic from the photo shoot. 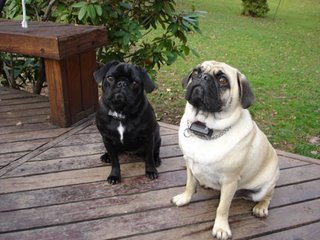 Lola and Luda... I still couldn't get them both to look. Luda's eyeing the treat.

Anonymous said…
Wow, well done that's gorgeous! I love birch, one day I will knit my own but I'm happy to drool over yours for now! Your mum will LOVE it.
7:37 AM

knittingphilistine said…
Your birch is BEAUTIFUL! And so fluffy and wintery!
8:42 AM

Stacey said…
That is beautiful - I'm sure she will treasure it!

I know what you mean - I have three dogs I tried to get to stay for a photo shoot! It's hard to get them to sit still, let alone look at the same place at the same time!
9:58 AM

Veronique said…
Wow! Oh, I love huge shawls! (Why did I make my Birch with size 4 needles?). I'm sure your mom will be very happy and proud.
2:00 PM

when i did my own birch ages ago i didnt even bother weaving in ends or anything. i figured with ksh i would just rub the two ends togther vigorously (as if i was doing a spit splice but without the splicing) and let it be at that. to date nothing has come undone.
9:11 PM

Anonymous said…
it really is beautiful. i love the colour you knit it in.
i find that with lace i tend to go really slowly too, hate the thought of having to rip back hundreds of stitches each row.
i'd say it was *well worth the effort and i am positive your mum will adore it. who wouldn't? :0) x
4:26 PM

Melissa said…
looks great! you did such a nice job and your mom is one lucky gal! sigh, i just love ksh!
1:40 PM

craftoholic said…
So soft and fluffy, it looks gorgeous!
1:35 PM

Anonymous said…
birch is gorgeous. I love your photos and the color choice is beautiful.
4:08 PM

Elizabeth said…
Great job with Birch - the color you chose is so beautiful. I have never been able to knit successfully with KSH, so I'm always impressed when I see a finished KSH project.
10:20 AM

carrie said…
gorgeous! you did a fabulous job on a really, really difficult pattern. you must be so proud.