Last week, I reached a point in my knitting quite foreign to me. I had nothing on the needles. With this freedom brought an uneasiness and insatiable need to find the "right" project. I started with this to keep me occupied while I mulled over my next big project. 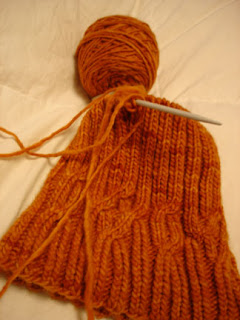 I was making good headway with this project, loosely following these directions and even using the magical 96 stitches. But I started this project without valuable information. Apparently, the intended owner of the hat has a giant head and was even nicknamed "Domer" in high school (or so J reports). I've been friends with "Domer" for years, how could I miss something like this? Maybe I am in the clouds like J is always saying... Anyway, after trying this on every row or so and making J model every 10 rows or so, the project is on hold indefinitely. J thinks it's too tight and after the first mishap (scroll down), I'm not gonna make "Domer" pretend a second time to like a hat that doesn't work. Plus, look how long it is! He'd look like Dumb Donald from Fat Albert. I might just keep it for me after ripping some rows and see if I can make another hat with the left overs. Selfish knitting....
After that headache, I swatched and swatched and finally cast on for this: 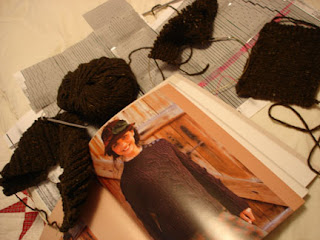 Yay! Demi. It's about time I gave this a chance on the needles. The yarn's been hibernating in the stash since spring/summer or whenever Rowan announced they were discontinuing the Yorkshire line. I took Ashley's advice and expanded the chart and cut and pasted it all together. Mine's huge somehow. I just kept enlarging and enlarging until I thought it was legible, but didn't realize just how big until I taped the sucker together. It's like sweater blueprints. I'm knitting the small size on smaller needles, which is already causing me worry. All my sweaters always have a little more ease than desirable and I got gauge after washing my swatch (with smaller needles than suggested) and the smaller size schematics match my best fitting sweaters (see how I'm trying to prove some point to myself), so I decided to cast on for the small size. I'm worried because I'm usually a medium in store bought sweaters. I feel like I did my homework, so I'm gonna go just go with it. ... deep breath...

This puppy is gonna take me awhile. It takes all my brain capacity to remember what each symbol means and then remember what cr2 or cr3d or cr5yd97nd tbl means. It takes patience, people! Hopefully I'll get it done by the end of winter, although that's gonna be tough if Punxsutawney Phil's prediction is on the mark.

Because I couldn't just work on Demi without my brain turning to mush (plus, how am I supposed to watch TV?), so I cast on for these: 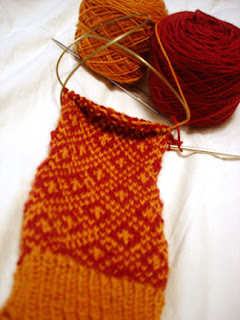 Mmmm fair isle. This is my first time working with Gems Pearl and dang is it thin! Also, I'm not sure if I got a bum skein or something, but I found like 5 knots in the orange during winding. Ugh.

Then, out of nowhere I had a yearning need to cast on for socks. Like, during-work-I-couldn't-stop-thinking-about-sock-yarn kind of need. Well, that happens more frequently that I'll admit, but this time I ran home and winded a skein and cast on. I was going to see this, so I could only knit about 3 rows before I had to leave. Still, I had to cast on. 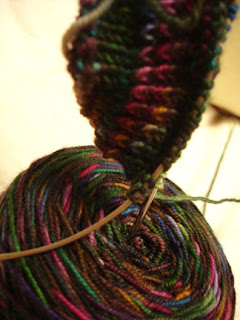 And you know what, it felt good! This is a pretty good color depiction of the skein - a swampy brown/green with loads of bright color stripes. It's the bonus rare gems skein from the BMFA Sock Club. Want more? Okay... 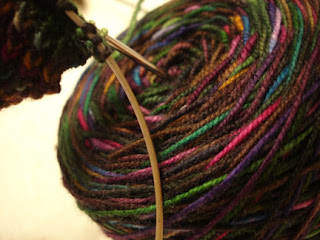 Okay, see my problem? I went from no projects to many projects in the blink of an eye. Bad knitters ADD. Bad Kelly.
Also, here's one of the recent FOs. I played around in photoshop to make the picture look cool. It's hard to take photos of your own legs! Legwarms from LMKG in Cascade Alpaca. 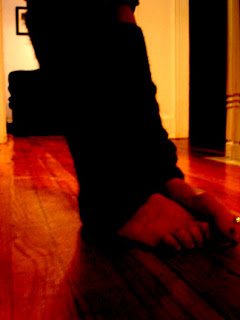 Because I want this to go down in history for longest post ever, here's a sample of the other activities from last weekend (it's not all about the crafts over here at la Casa de Drago[knit]fly). 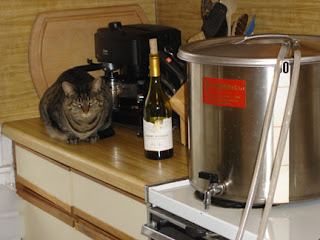 There's Zoe overseeing her latest brew - a batch of IPA - I bet your cat doesn't brew beer (mmmm, beer)! Check out her serious face - she's all business when it comes to beer.
Next time we'll chat about fabric and my recent work junket to Joann's.

Anonymous said…
That BMFA is some gorgeous stuff! Can't wait to see the finished socks!
10:29 PM

Melissa said…
holy moly! are you sure you didn't have anything planned for the needles? that is a lot of stuff there! really? from nothing to...well, everything? :D
1:16 AM

Anonymous said…
so many proects on the go! i get pretty overwhelmed once i have more than 2 knit projects! :0)
i get those sock knitting urges too, but i have been able to resist casting on more socks, so far anyway, you may just be a bad influence on me ;0)
4:16 AM

lobstah said…
Wha?? Rowan discontinued the Yorkshire Tweed line? How did I miss this? I loved that stuff :( I wonder if the "Scottish Tweed" line is supposed to replace it?

Stacey said…
too funny -from nothing to plenty in one fell swoop! go with your gut on Demi - if you swatched and calculated, it should work out!!!! I love the BMFA bonus color - the dark with the bits of bright is great!
12:37 PM

knittingphilistine said…
I am intrigued most by the BMFA socks (great colors!) and the beer brewing. And together, the beer and the sock knitting, just might be the best project you got going! (Demi and beer just don't mix, I suspect).
10:21 AM