A Tale of Two Cakes

November 16, 2009
With Alice’s birthday quickly approaching, I have cakes on the brain. Alice reaps the benefits of a family scattered with two parties – one yesterday here in CT and one next weekend in NJ for my family.
The Healthy Cake 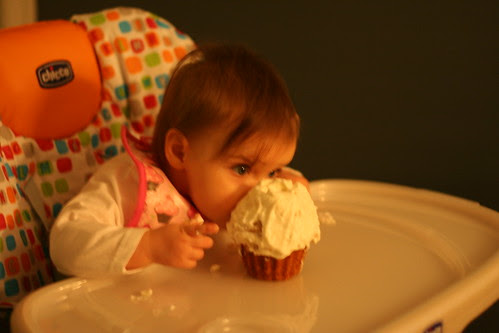 Make fun of me all you want, but I made Alice her very own special (and healthy!) mini birthday cake. Somehow the ingredient list (carrots, apple juice concentrate, wheat germ, whole wheat flour, etc.) and the notable absence of sugar didn’t set off my panic button that I was flirting with baking disaster. It didn’t fully hit me until I tried a bite of one of the extra mini cakes. And promptly spit it out….then rinsed out my mouth. How could I expect Alice to eat this? It was more of a Metamucil substitute than birthday cake!
Unfortunately, I had already started on the grown-up cake – a decadent, fudgy confection laced with coffee – way too rich, caffeinated, and allergen-laden for Alice’s first cake. Plus, I had invested so much time into her cake what with shredding carrots, boiling them in apple juice concentrate, then pureeing the mixture, etc., I was averse to tossing it. I justified feeding her the “cake” (I use this word loosely) because the cream cheese icing (recipe from same website) I made was actually quite tasty. I do have to admit I was a little nervous. If she refused her cake, I would have been bummed there were no 1st birthday cake smash pictures!
It turns out that I don’t know my daughter or my taste buds are off because get this – she actually ate the cake. And showed her appreciation by smashing it in her hair, all over the floor, her shirt, etc. For that, the dog was also appreciative.
While Alice was intrigued by the cake at first – as evidenced by her eyes lighting up and her playing with the icing – she wasn’t quite sure what to do with it… Was this a new toy? It’s on my highchair….should I eat it? Why is everyone looking at me? Daddy stepped in and gave her a lick of icing, which was all it took. Within moments, she dove head first into her cake.And then she proceeded to eat her cake…um, like a dog. Who knew watching your child eat cake like a dog could be the cutest. thing. ever?
I don’t mean to sound so down on the cake, obviously Alice liked it! I think my problem is that despite all the healthy ingredients, I expected a traditional moist and decadent carrot cake. I think the cake would benefit from some unhealthy and baby-unfriendly ingredients like regular flour and walnuts, but then it wouldn’t be a good baby’s first birthday cake, would it?
The real saving grace was the whipped cream cheese icing. Only four ingredients and oh so delicious. I might have eaten the leftovers spread over some graham crackers. Just maybe.
The Unhealthy Cake 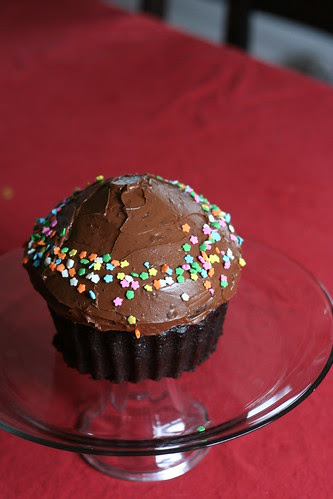 Seeing as I went healthy on Alice’s cake, I had to balance things out with a decadent and nutritionally void grown-up cake. Being a die-hard Ina Garten fan, I opted for the Beatty’s Chocolate Cake and Buttercream icing, a recipe I’ve seen her make several times on her show and been itching to try.
I added an extra layer of excitement by using the Wilton Giant Cupcake pan, so I had to closely monitor the oven during baking. I deserve a slap on the wrist because I opened that oven door at least five or six times. And of course, I didn’t take note of the actual finishing time. Because the cupcake top portion is significantly smaller than the bottom, I let the bottom cook for about 10 minutes before filling the top side. I then set the time for another 20 minutes. About 7 toothpicks and 15 to 20 minutes later, I think it was done but that was two days ago and my brain is foggy.
This cake was a total win. The icing (I halved the recipe) was light and creamy. The cake was dense and rich, yet moist.
The only minor change to the recipe was using instant espresso instead of instant coffee; I trust Ina. And you should, too! Go make this cake!
More birthday fun to come!

Veronique said…
Alice looks super happy with her cake! I guess she doesn't know what cake really tastes like ;) Maybe next year...
10:48 AM

Unknown said…
Maybe I should've used your recipe - I gave my daughter a bit of white cake and frosting and she refused to eat it. Oh, the days when we didn't crave sugar. =)
Cute giant cupcake!
8:29 PM